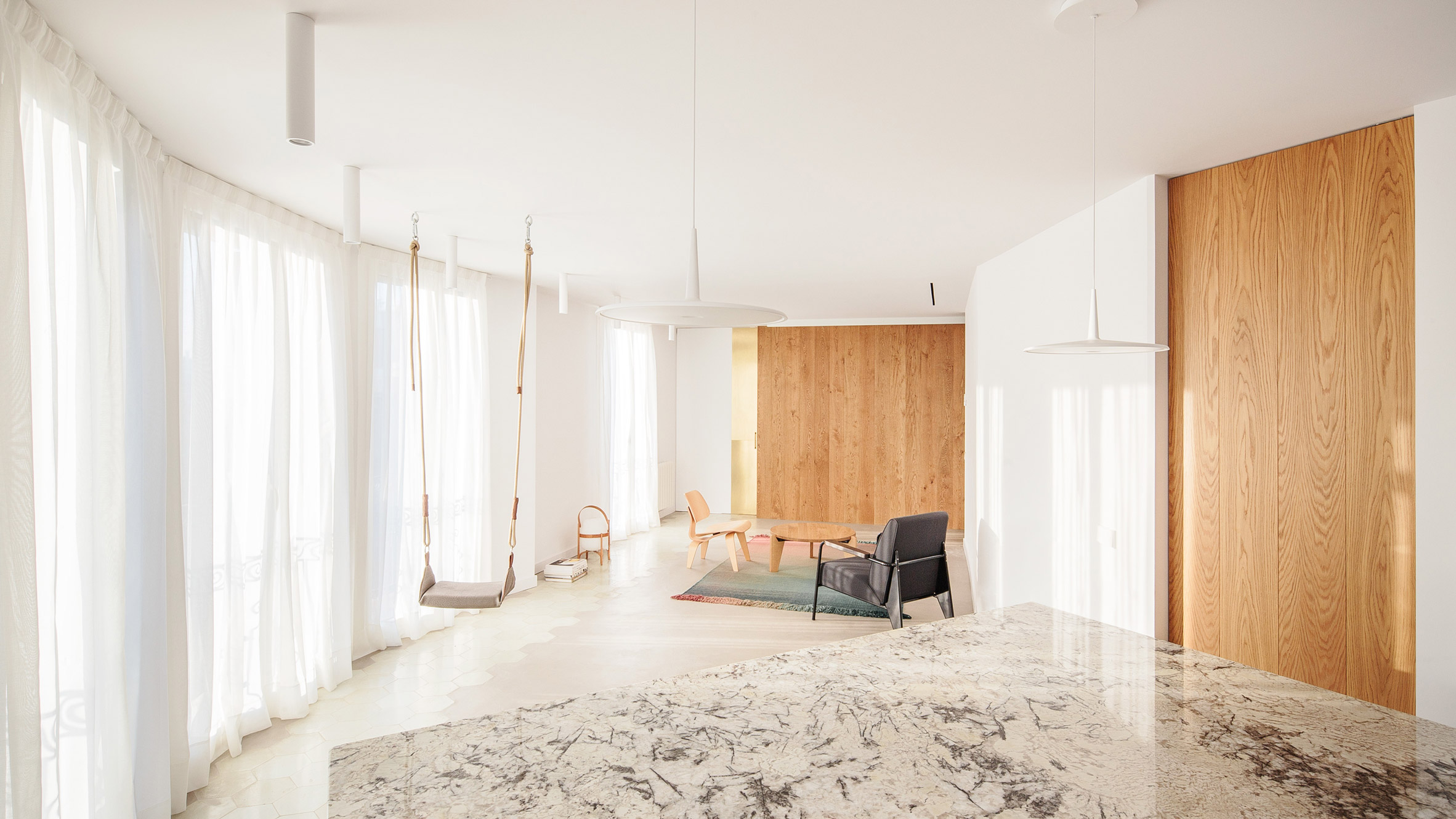 A series of light-filled living spaces feature inside this Barcelona apartment, which Raúl Sanchez Architects has stripped back to highlight the building’s sloped facade.Atic Aribau is set within one of the chamfered-corner residential buildings that are characteristic of Barcelona’s Eixample neighbourhood.The 110-square-metre apartment – which takes its name from a nearby street – has been overhauled by locally-based studio Raúl Sanchez Architects to spotlight its distinctive architectural features.

“Previous to the design, the apartment looked really old-fashioned and had a lot of small, dark rooms – no functionality was there, it wasn’t appealing,” the studio’s eponymous founder, Raúl Sanchez, told Dezeen.

“The new owners are a couple with a pair of cats, who just wanted bigger spaces and more light inside.”

The studio therefore knocked through all of the apartment’s existing partitions, only leaving behind a major structural wall which curves like the building’s exterior.

It now serves as an anchor to the open-plan living and dining area, which has been completed with a lilac kitchen suite and marble-topped breakfast island.

Although a majority of the floor has been covered with pale grey mortar, hexagonal tiles that run along the chamfered wall have been preserved from the previous fit-out.

“[The floor] precisely points out the importance of the chamfer itself in the conceptual development of the proposal,” added Sanchez.

A swing has also been suspended from the ceiling, in a nod to the clients’ playful personalities.

Private quarters of the home are concealed by a full-height oak wood panel that runs perpendicular to the apartment’s front facade.

It is integrated with a series of doors, some of which are inlaid with wide strips of shiny gold brass, or fitted with thin copper handles.

“I didn’t want them to look like doors, they had to look like something precious and mysterious,” added Sanchez.

Surfaces in the bedroom have been kept all white, except the headboard which appears to extend up from the timber floorboards.

Colour has been applied more liberally in the bathroom, which lies behind the apartments pre-existing structural wall. Blush-pink mortar covers almost every surface, contrasting against a chunky black-marble washbasin.

The space is fronted by black-framed panels of fluted glass, obscuring views from the adjacent corridor.

There an extra bathroom at the rear of the apartment, along with a small room where the owner’s cats can play.

Atic Aribau is one of several projects that Raul Sanchez Architects has completed in Barcelona.

Others include a duplex apartment in the city’s Raval neighbourhood, which is centred by two huge golden cubes, and a basement flat in the La Barceloneta area which boasts a grand vaulted ceiling.

Photography is by David Zarzoso.