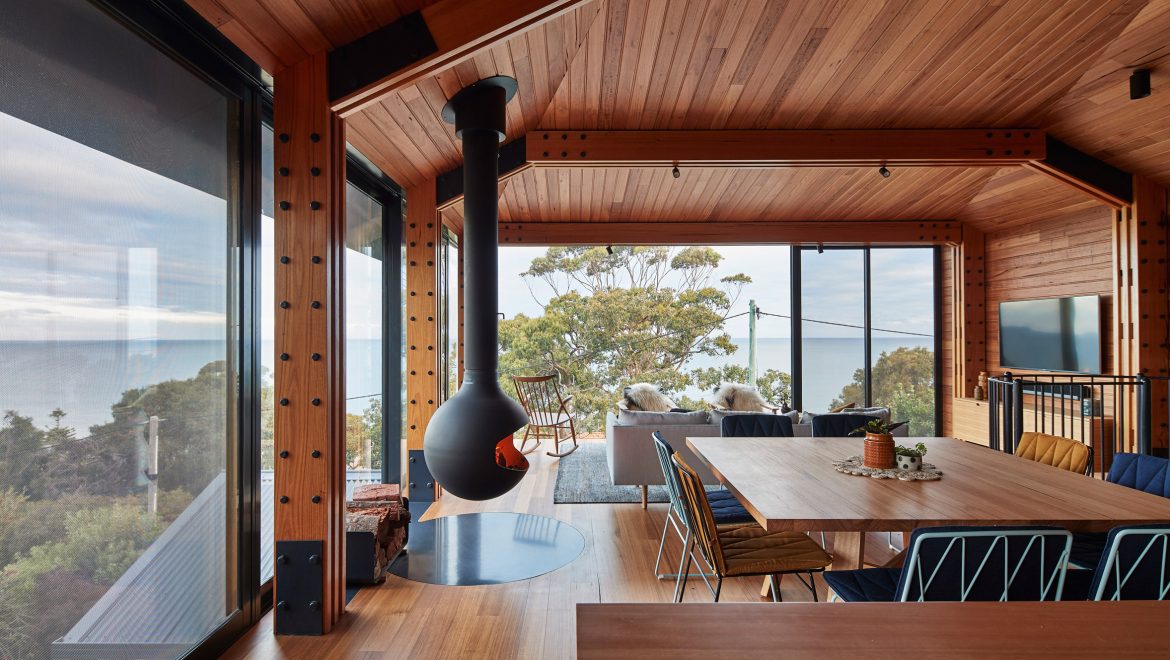 Fed up with all the “McMansions” springing up along Australia’s Great Ocean Road, Austin Maynard Architects has restored an old beach shack and built a second, elevated building alongside it.

The brief was to give the clients – a young couple – a bigger home, with views of the the ocean. But the couple also wanted to protect some of the area’s architectural heritage, by preserving their historic beach shack.

The solution developed by Melbourne-based architects Andrew Maynard and Mark Austin was to completely restore the old cabin, and then construct a new building that hovers over its roof.

“Our challenge was to avoid doing what some neighbours, and many other people along the coast, have done,” they explained.

“We refused to have yet another Great Ocean Road shack sacrificed and replaced with a McMansion.”

“We do our best to avoid the simple temptation of demolishing and replacing,” they said.

“Where extensions are required/desired, we aim to retain and respect the existing shack and its scale.”

The Dorman House extension has a similar footprint to the original property, but it comprises two storeys to ensure it offers the best view available.

Unlike the modest cabin, with its monochrome-painted weatherboard exterior, the new building is made up of an assortment of contemporary materials, including large glazing panels, translucent polycarbonate plastic and richly toned ash wood.

A criss-crossing cypress timber framework provides enough support to allow the upper part of the structure to cantilever over the shack’s roof.

It is this framework that makes the building look like a glasshouse on stilts.

“The new living space does not protrude forward over the ridge-line of the old house and avoids dominating the original shack unnecessarily,” said the architects.

Inside, the shack is much as it was, with a lounge, bedroom and generous hallway at the front, although the old kitchen has now been replaced with an en-suite bedroom and a laundry room.

A large open-plan kitchen, dining room and living space occupies the new elevated part of the property. The owners have also slotted in an extra bedroom in the polycarbonate-framed space underneath – an area originally designed as for utilities.

“[The clients] loved it so much that they wanted it as their bedroom,” said the architects. “We added heavy curtains and huge sliding doors so that the space could have as much light and openness as they wanted.”

“They could leave it open on a moonlit night and sleep with the sea breeze rolling over them, or close it up and curtain it into darkness for a cool summer afternoon nap,” they added.

An assortment of materials also features inside the building. Ash lines the inside of the new living space, while the flooring in the bedroom underneath comprises raw concrete bricks.

There is also a spiralling metal staircase that connects the two floors.

“What could easily have been a white plasterboard box full of downlights is, instead, detailed and well considered,” said the architects. “It’s a space that exudes character and responds to the seasonal changes and hours of the day.”

“The lighting inside is very evocative, controlled so you can work or prepare a meal without flooding the space with light and compromising the view. Full-height windows on the northern side of the living space slide open to allow in the sea breezes.”

Andrew Maynard founded the architecture studio in the 1990s, and has completed projects including a periscope-shaped extension. He changed the name of the firm in 2015 to reflect the role of Mark Austin, who has been a key member of the team since 2007.

Other projects the pair have completed in Victoria – the Australian state that the Great Ocean Road runs across – include a house that hides a giant toy box under its floors and another comprising a trio of glass-ended boxes. 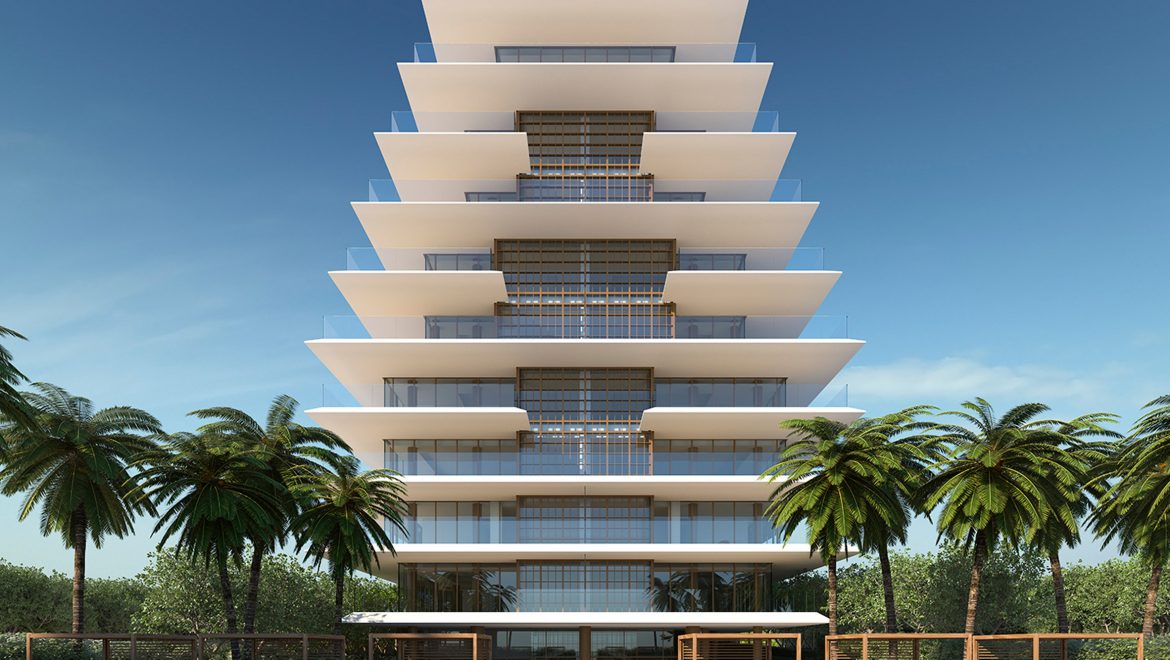 Italian architect Antonio Citterio has been tapped to conceive a luxury residential building in Miami Beach, marking his first architectural project in America and the latest in a string of residential developments in the area.

Called Arte by Antonio Citterio, the 12-storey apartment building is slated to rise on a vacant, one-acre (0.4-hectare) parcel in Surfside, an exclusive beach community situated between South Beach and Bal Harbour.

The oceanfront tower will contain 16 “ultra-luxury condominium residences”, with Citterio-Viel and Partners – founded by Citterio and Patricia Viel – designing both the architecture and interiors. Units will measure 5,500 square feet (510 square metres) and larger, and will be delivered “furniture ready”, according to reports.

Interior materials will include Italian travertine with bronze accents, according to the team.

Based in Italy, Citterio has designed a number of hospitality projects around the world, including a series of Bulgari Hotels in Dubai, London, Milan and Bali. His residential work includes Salaino 10, a condo complex in Milan.

He also is a well-known product designer and has worked with B&B Italia, Kartell and Vitra, among other brands.

Encompassing 150,000 square feet (13,935 square metres), the Miami development will offer amenities such as a spa, fitness centre, and indoor and outdoor pools. Each residence will be allotted three parking spots in an air-conditioned garage.

The developer plans to construct an amenity building across the street that will contain a golf simulator, club room, cigar room and rooftop tennis courts.

The landscape will be designed by Enzo Enea, who has a Miami studio and two offices in Switzerland. The grounds will feature an aluminium sculpture by artist Robert Indiana, as part of his ART series conceived in 1972.

Kobi Karp Architecture and Interior Design, a local firm with studios in the Middle East, will serve as architect of record. 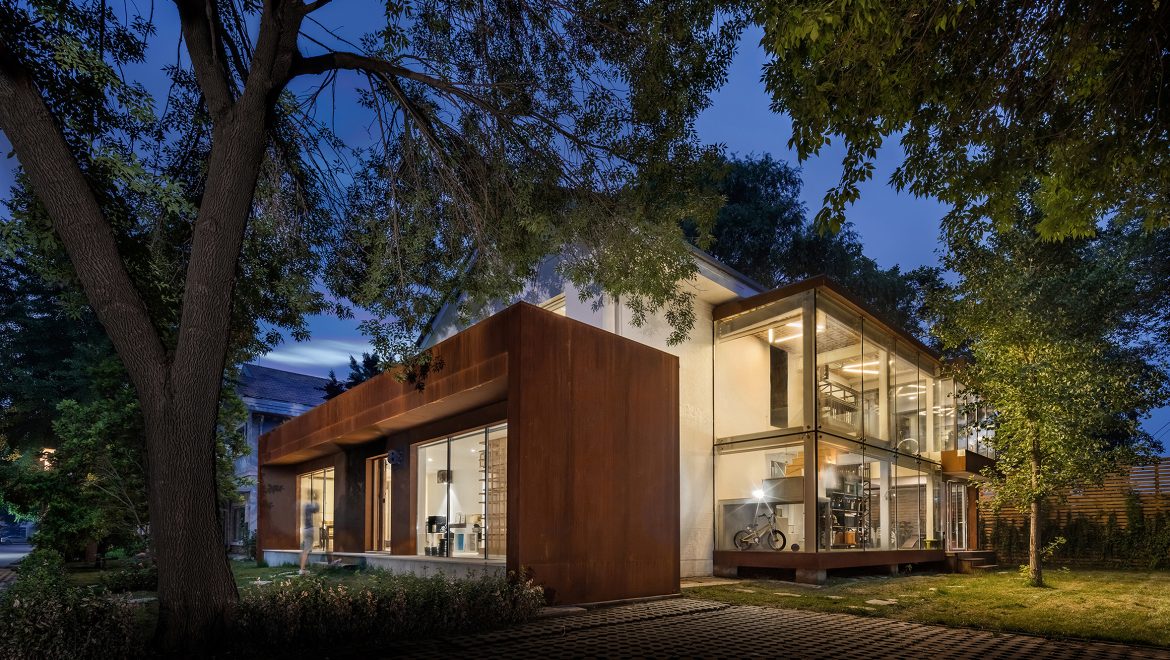 Cun-Design was asked to oversee the refurbishment of the existing property in the Chinese capital’s Tongzhou District to create a new workspace for Blue Moon Films.

The detached house located on the bank of the Wen-Yu River in the east of the city was only built in the 1990s, but had already fallen into a state of disrepair.

The architects recognised that the house’s facades and structural framework could be retained and adapted, but sought to completely transform the cramped interior to give it a more modern feel.

“Our first impression on this house is that it is out of tune with today’s people and their way of living,” said Cun-Design. “We maintained its original structure during the renovation and formed a contrasting boundary between old and new within the project.”

The refurbishment began with the removal of all non-structural internal walls, resulting in more open and flexible spaces. Doors and windows were also removed to create uninterrupted circulation throughout the building.