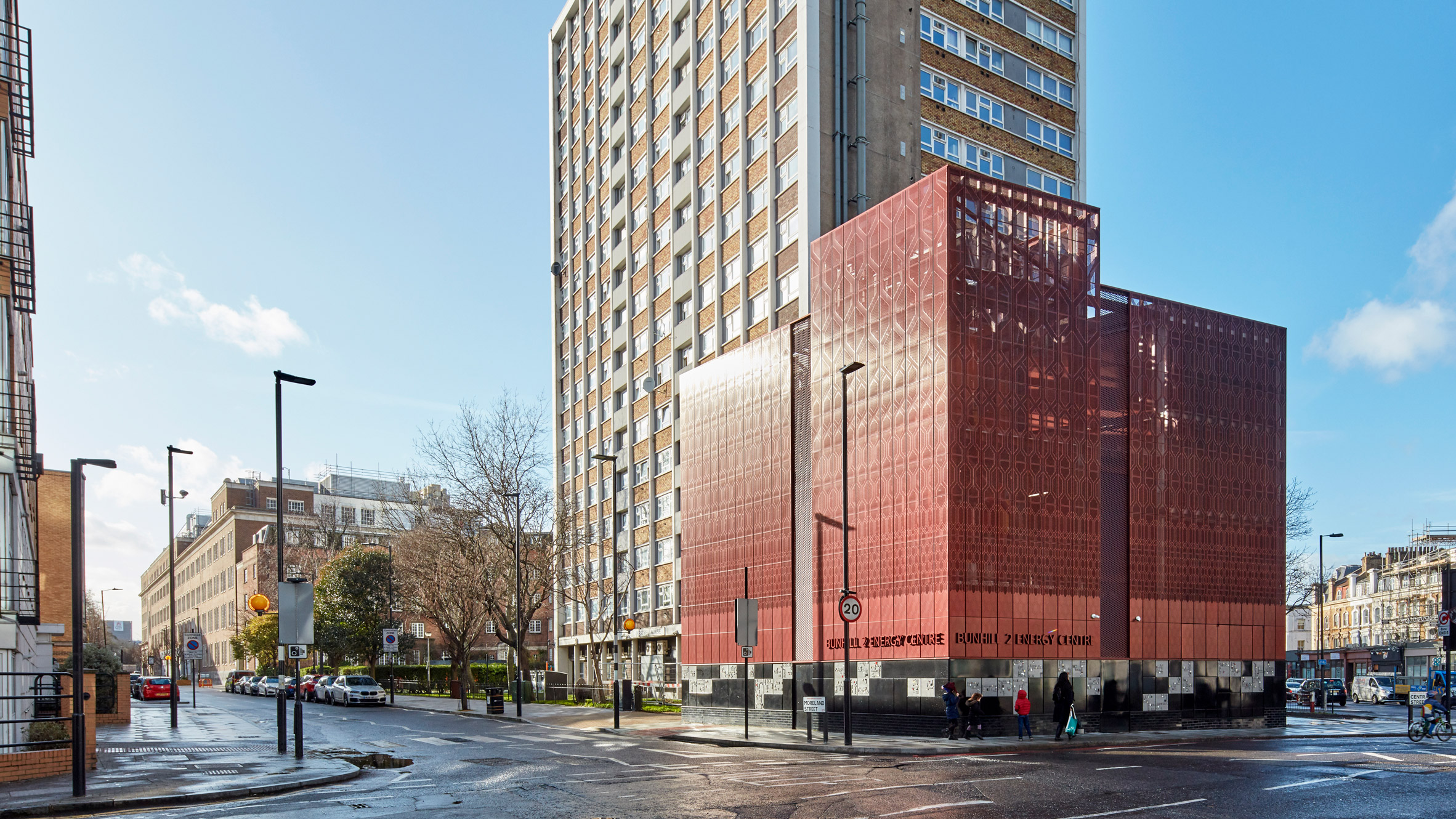 The Bunhill 2 Energy Centre has started capturing excess heat from the London Underground to help warm over 1,000 buildings in the UK capital.

A perforated red-metal pavilion by Cullinan Studio distinguishes the Bunhill 2 Energy Centre, which occupies the site of the disused City Road tube station that once formed part of the Northern Line.

It provides heating and hot water for hundreds of houses and several public buildings in the borough of Islington, helping to reduce heat bills, carbon emissions and air pollution in the capital.

It claims to be the first heat network of its kind in Europe.

Bunhill 2 Energy Centre relies on a large underground fan that extracts hot air from the Northern Line tube’s tunnels, and uses it to heat water that can be transferred to the neighbourhood.

It has been developed by engineering firm Ramboll with Transport for London and Islington Council, and is marked above level by a steel shroud by Cullinan Studio.

“Capturing waste heat from tube tunnels and using it to supply heating and hot water to thousands of local homes hasn’t been done anywhere in the world before,” said London Underground’s managing director Andy Lord.

“This ground-breaking partnership with Islington Council is a really important step,” he added.

“Heat from the London Underground has the potential to be a significant low-carbon energy source and we are carrying out further research, as part of our energy and carbon strategy, to identify opportunities for similar projects across the Tube network.”

Cullinan Studio’s structure encloses the energy centre in prefabricated panels, which are mounted on a glazed brick base.

The structure was developed in collaboration with McGurk Architects to encase the machinery and ensure that it could be easily maintained.

According to Cullinan Studio, its striking finish makes use of “attractive materials” to challenge the traditional aesthetic of civic industrial architecture to reflect the ingenuity of the scheme.

“The client challenged us to make this more than just an enclosure to screen plant but celebrate this new form of energy generation,” explained Alex Abbey, partner at Cullinan Studio.

“They wanted a building that would be robust, long-lasting and celebratory of this new typology for our cities,” he told Dezeen.

“They directed us towards the Victorian civic architecture of the water and power industries and the sense of functional, yet understated pride of purpose these demonstrated.”

The cladding forms part of a prefabricated, panellised structure designed to easily and fully removable to accommodate the need for machinery maintenance.

It also ensured that its construction time was quick, helping to reduce disruption to the local community as it was built.

The structure’s deep red colour was chosen as a nod to the oxblood-coloured tiles found on London Underground station, and also the copper pots of gin distilleries that used to be located near the site.

Their perforated patterns reflect the activity behind the cladding, and the “sense of dynamic, rising warm currents of thermal energy”. This also helps to ventilate the energy centre.

The brick base of the pavilion was developed by the studios to be resistant to graffiti and damage, and is brightened by artwork by Toby Paterson that is made of cast aluminium panels.

These panels feature block-shaped motifs that echo the layout of flats within the adjacent King Square Estate, which the heat network now serves.

Plans for the Bunhill 2 district heating system were first revealed in 2019, and the scheme was expected to reach completion in the same year.

It is the second phase of Islington Council’s Bunhill Heat and Power scheme – a heat network in Islington that was established in 2013 to warm approximately 700 homes.

The network currently channels heat created in the Bunhill Energy Centre power station into local council housing, schools and a leisure centre. Bunhill 2 will extend this network to more community buildings and a further 450 homes.

Photography is by Paul Raftery.