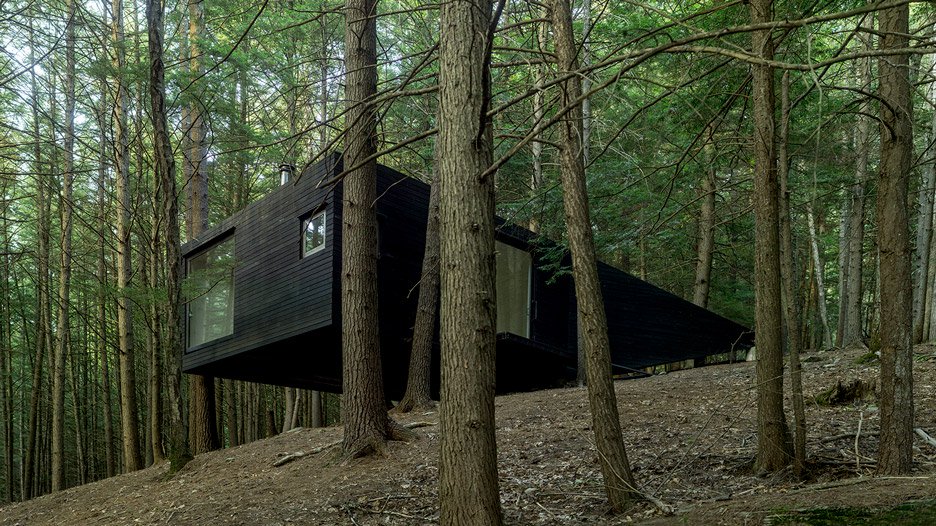 Manhattan studio JacobsChang designed this tiny blackened timber cabin on a shoestring budget for clients who built it in a forest in upstate New York with the help of their friends.

The structure called Half-Tree House, is located in the woods in Barryville, roughly 100 kilometres north of New York City.

“From the outset, the project outlined two formidable directives: to design a structure that can be constructed by two amateur weekend builders and to consider a budget of $20,000 ($50 per square foot),” said the architects.

“The topography presented a difficult challenge. In an effort to minimize sitework – in this case, shovels by hand – and to eliminate the need for large footings, retaining walls and pumped concrete, the architecture is lifted above the ground and relies upon support from the trees,” they added.

At one end of the structure, simple concrete footings are anchored into the ground, while at the opposite end the cabin is held up by adjoining trees via a specialised anchoring system called a Garnier Limb. This consists of a metal element bolted into a tree, which in turn supports the building’s wooden frame.

“The Garnier Limb is a patented slip-joint connection allowing the tree and the structure to behave independently,” explained the architects.

The diminutive cabin is just large enough to fit a bed, an armchair and a small area for preparing basic meals, with heating provide by a wood-burning stove.

Three floor-to-ceiling pivoting windows provide views to the woods, and let air circulate when they are open. The southern aperture also serves as the entrance.

The materials used were largely sourced from the property’s 60-acre site, including the wooden cladding, which is made from pines felled from the surrounding woods.

Traditional Scandinavian pine-tar was used for the outside, giving it a dark black colour. This contrasts the treatment inside, where the walls were whitewashed and the floors sealed to retain a natural tone.

Studio Padron recently completed a similar project, also in upstate New York. Called Hemmelig Rom, it consists of a one-room library and guest house that was completed with excess lumber from the construction of a nearby property.

Blackened timber cabins are enjoying a moment of popularity, with other recent examples ranging from a small lakeside cabin in Canada to a prefabricated model recently unveiled by Muji that will sell for £21,000.