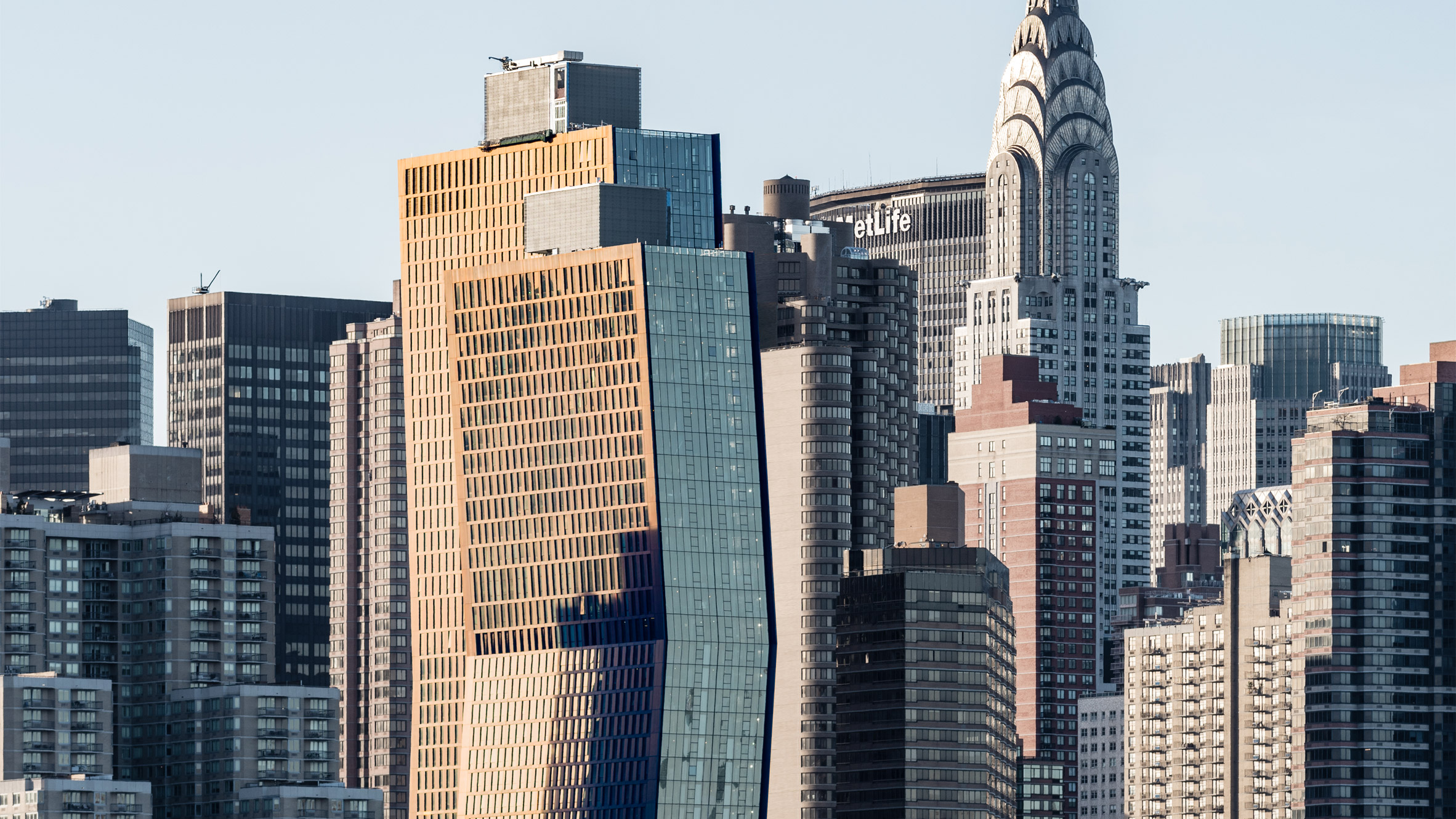 US firm SHoP Architects has completed a pair of skyscrapers that feature coppercladding, bent silhouettes and a skybridge suspended more than 90 metres above the ground.

The first tenants have moved into the American Copper Buildings, located on First Avenue and 36th Street, along Manhattan‘s East River waterfront.

Designed by New York-based SHoP Architects, the project’s name stems from the 4.25 million pounds of raw copper that were used to clad the 41- and 48-storey skyscrapers.

Beyond the atypical cladding, the residential towers have distinctive bent silhouettes, with the lower and upper portions sloping in opposite directions.

“The American Copper Buildings has earned attention and praise around the world for its boldly unconventional architecture, including the angled silhouettes of the towers that maximise views and give them a ‘dancing’ appearance,” SHoP said.

Measuring 100 feet in length (30 metres), the three-storey skybridge contains an indoor lap pool and a hot tub, along with a bar and lounge for residents.

Other amenities within the towers include a double-height fitness centre with a rock climbing wall, yoga studios, spa treatment rooms, a Turkish-style marble hammam with a plunge pool, a catering kitchen, a juice bar and a children’s playroom.

Moreover, the rooftop of the East Tower has an infinity-edge swimming pool, a landscaped sky bar, an open-air lounge and areas for dining and grilling.

Combined, the towers contain 761 rental units and more than 300 different layouts, ranging from studios to three-bedroom apartments. Prices start at $3,200 (£2,571) for a studio.

“The residences are punctuated with large, floor-to-ceiling windows that command striking views of the Empire State Building, East River and Manhattan skyline,” the team said.

Each tower contains a lobby with soaring ceilings and views of a new park on the property. Valet service is offered for the onsite, underground parking garage.

The project was backed by JDS Development Group – a major developer in New York that is also backing SHoP’s skinny skyscraper that will overlook Central Park and the architects’ supertall skyscraper for Brooklyn – and another local developer Largo.

During a tour of the construction site last year, SHoP cofounder Gregg Pasquarelli said the decision to use copper cladding was inspired by New York’s iconic Statue of Liberty.

“It’s almost like a performance piece,” he said of the project. “It started as a shiny penny, and it’s already turned to a rich brown colour. Over the coming decades, the buildings will turn green like the Statue of Liberty.”

Other new residential projects in New York include a “pixelated” luxury condo buildingin Queens by ODA and an apartment tower by S9 Architecture that cantilevers over a low-rise neighbour.