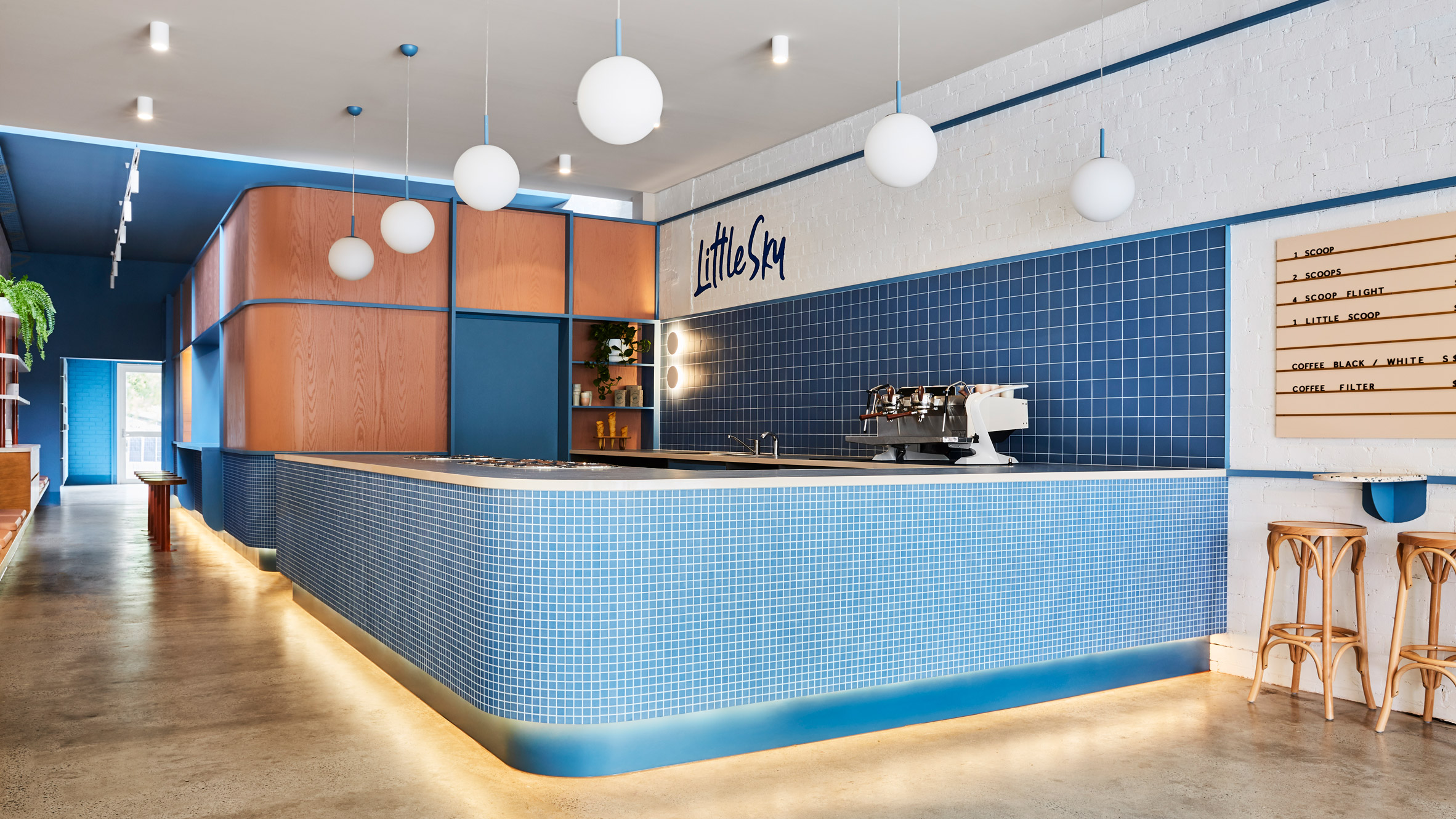 Customers can get a glimpse of gelato being made inside this ice cream shop in Melbourne, which local studio Ewert Leaf has completed in shades of blue and pink.

Located within a late 19th-century building in the coastal suburb of Brighton, the 140-square-metre Little Sky gelateria has been designed by Ewert Leaf to display the art of ice-cream making and encourage social interaction.

A solid oak bench seat extends the length of the interior, topped with salmon-coloured seat cushions and baby-pink terrazzo side tables that have cherry-red bases.

The communal bench encourages customers to sit alongside each together and strike up conversations.

The adjacent service counter connects to the kitchen, which is wrapped by a joinery wall. Directly in front is a row of stools where customers can watch staff preparing gelato through a service hatch.

“To encourage customer engagement, the theatre of gelato is captured via a large open window that punctuates the kitchen joinery wall,” explained the studio.

“Showcasing production was an integral part of the design brief, inspired by the clients’ studies in northern Italy and [Italians’] desire to share the gelato tradition.”

The studio has additionally restored the building’s rough concrete floors and brick surfaces, contrasting them against glossy fixtures such as the swooping service counter which is clad in deep-blue tiles.

All of the gelateria’s joinery and furniture was made especially for the project by a network of local manufacturers.

The locally-made ethos even extends to smaller elements, such as the pink-and-white ceramic bowls which are used to serve gelato in-house and the timber waffle-cone stands, which were hand-crafted from off-cuts of the timber bench.

The studio said that it considered the environmental impact of each element in the space, from the furnishings through to the packaging.

For instance, the take-away gelato cups are made from recycled paper and a majority of the crystal glassware was salvaged from a local charity shop.

“Attention to detail was achieved through the engagement of local artisans,” added the studio, “and implementing sustainable initiatives was key in ensuring that the business is run in the most environmentally responsible way possible.”

Other stand-out ice cream shops include Milk Train in London, which features cut-out clouds and pastel-blue walls, and Mister in Vancouver, which is set inside an old warehouse and uses liquid nitrogen to make its selection of frozen treats.