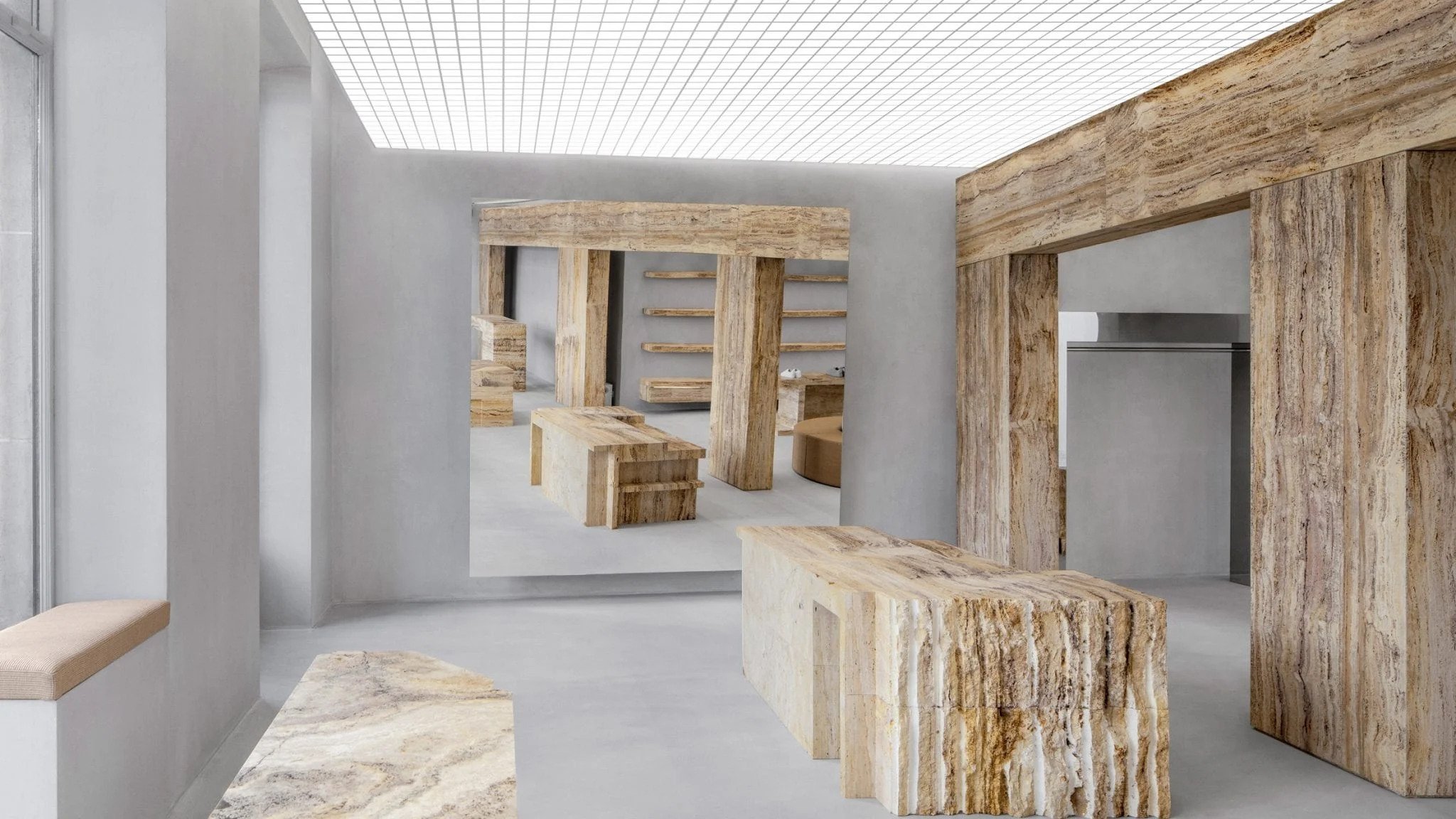 Located in the Marais district on Rue Vieille du Temple, the boutique stocks the brand’s full range of footwear, clothing and accessories, in addition to a curated selection of design objects.

The store occupies two rooms divided by a freestanding wall of light-yellow travertine, which references the columns and beams found in classical architecture.

Walls and floors are finished in raw concrete while overhead, a punctured grid ceiling conceals the store’s lighting system.

A series of sculptural display plinths made from honed, bush-hammered or raw travertine stone help to create a “grandiose” entrance, designed to emulate the feeling of stepping into an art gallery.

“The normal model for a sneaker brand is to cover every centimetre of the back walls in products from floor to ceiling,” Axel Arigato‘s co-founder and creative director Max Svärdh told Dezeen.

“We do the opposite by displaying our product on podiums in the centre of the room instead, like a piece of sculpture.”

Travertine was also used to form a series of shelves in the rear of the store and custom chairs in the dressing room.

According to Svärdh, the stone has been a key element in all of Axel Arigato’s retail locations so far.

“Our brand colour is a pale yellow so we were naturally drawn to the light yellow travertine,” he explained.

“We worked with different finishes to bring out its characteristics and more specifically highlight its impurities, which in itself makes it more beautiful.”

To contrast with the travertine, Halleroed wrapped an upholstered bench seat around one of the columns and introduced a chunky, stainless steel clothes rail.

This lines the store’s back wall and extends out into a courtyard filled with white gravel.

Axel Arigato was launched in 2014 as an online store for luxury streetwear. It opened its first brick-and-mortar space in London’s Soho in 2016 and has since expanded into four standalone spaces.

“We always look to the neighbourhood and the specific building that we are in [when designing a store],” Svärdh said.

“Paris is the home of luxury and the use of rich travertine stone really embodies that. All standalone stores have a gallery-esque feeling to them with mutual design codes but offer completely unique experiences.”

A large freestanding LED screen is used for displaying creative content in the Paris store.

The brand has previously worked with Halleroed – founded in 1998 by Christian and Ruxandra Halleroed – on its London, Stockholm and Copenhagen flagship stores, which all feature monochromatic colour palettes and concrete surfaces.

Photography is by Benoit Florençon.