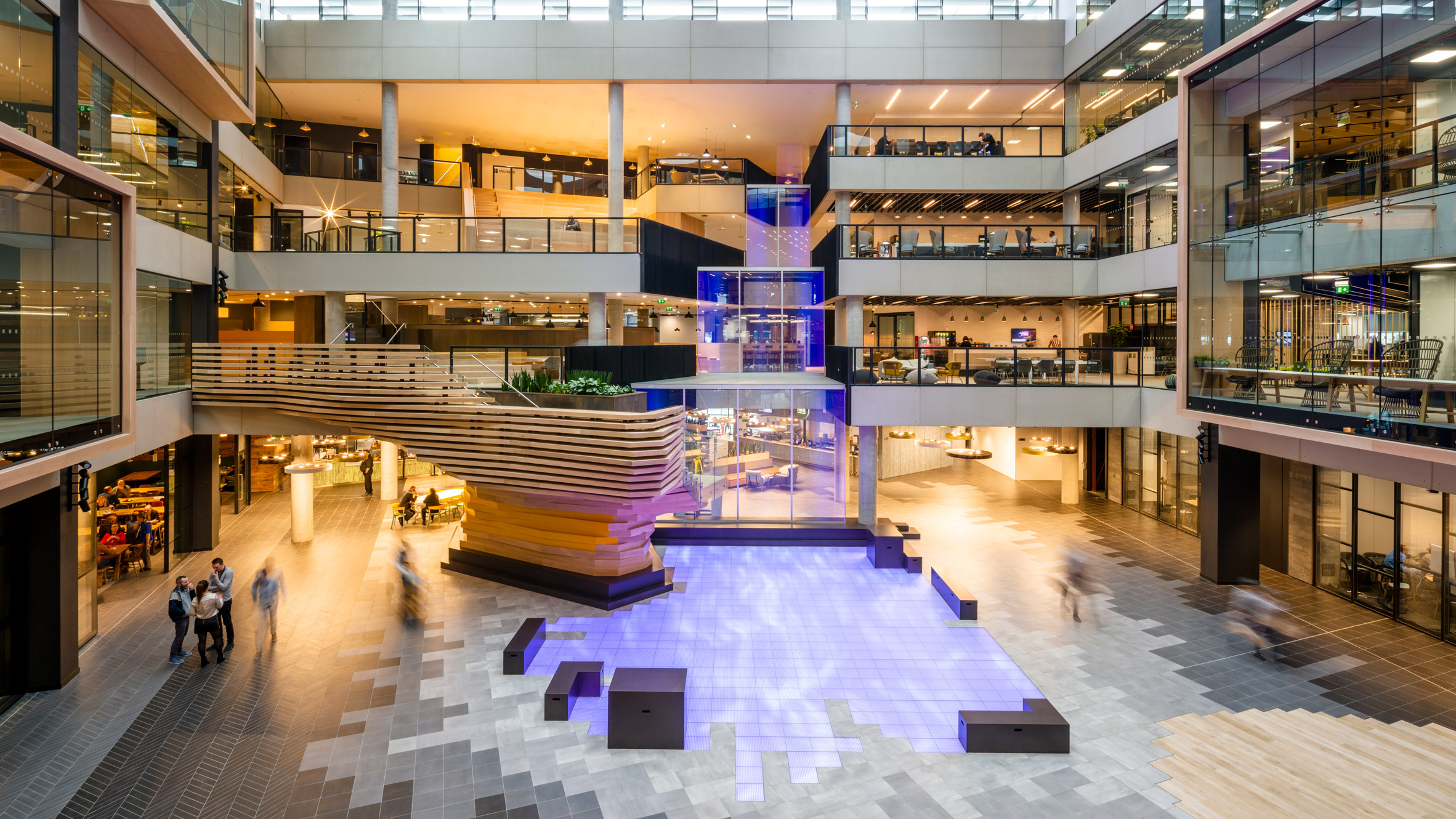 Microsoft Ireland’s new campus in Dublin is designed around the concept of an island, complete with a digital waterfall cascading through the atrium.

RKD Architects and London-based architects Gensler created the headquarters for the technology company’s 2,000 employees, who had previously been spread across multiple sites in the city. 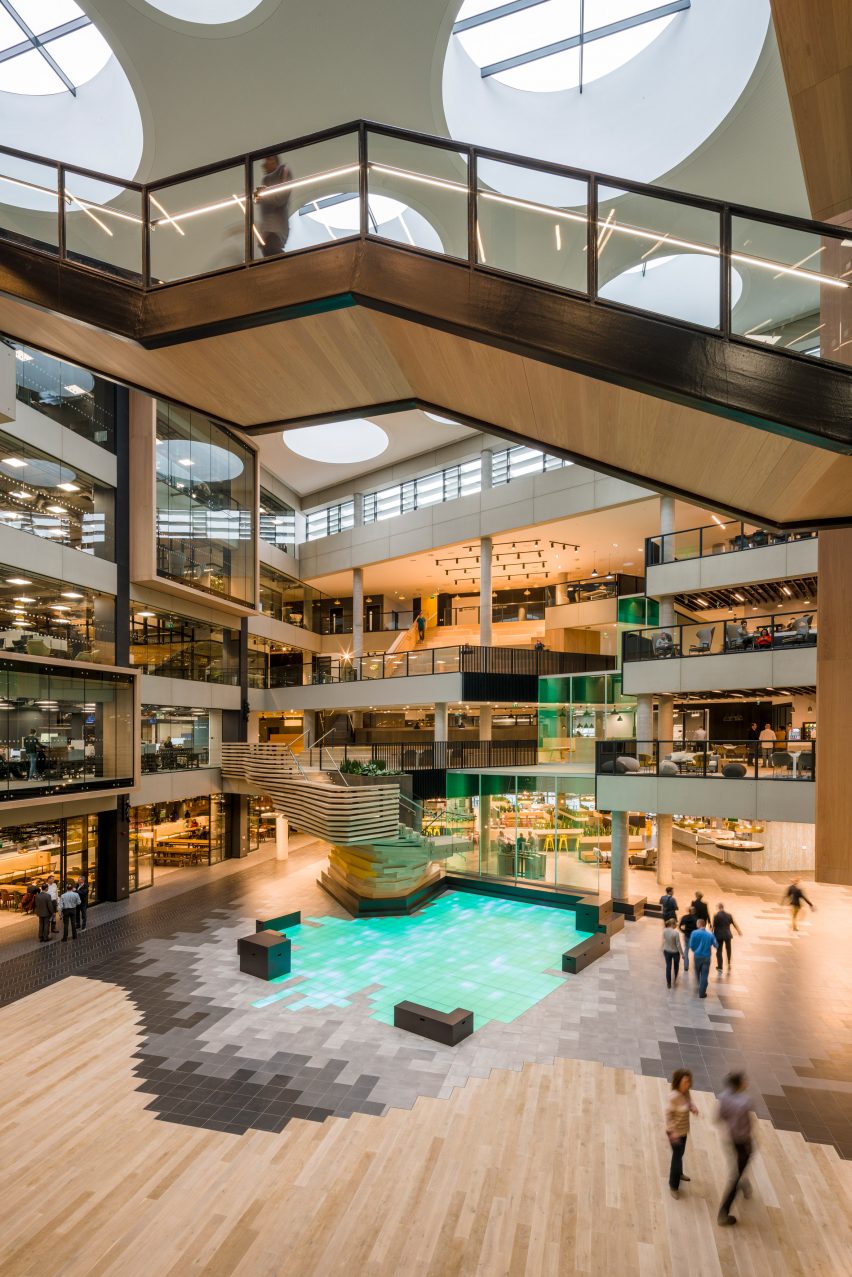 “We deliberated about how employees and visitors would interact in the new work environment since this will be the first time these team will be together in the same building, how they would harvest its resources and how they flourish and succeed in this new landscape.” 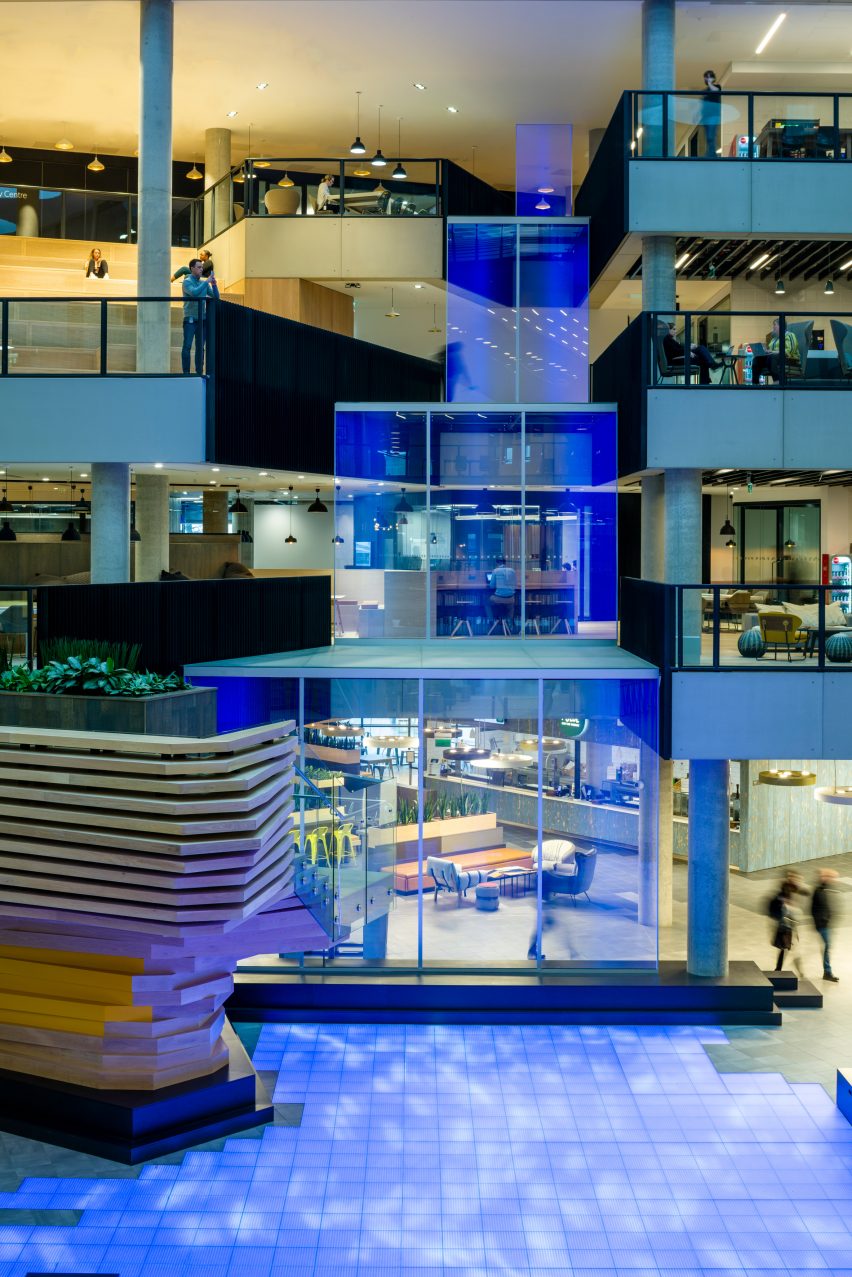 Landscape became the central idea for the office. Gensler and RKD Architects designed the 28,000-square-metre campus around the idea of an island, with different parts of the office corresponding to different topographies and their associated functions.

The team brought in with experts from its different departments to consult on the interiors concept, including landscape architects and retail designers. 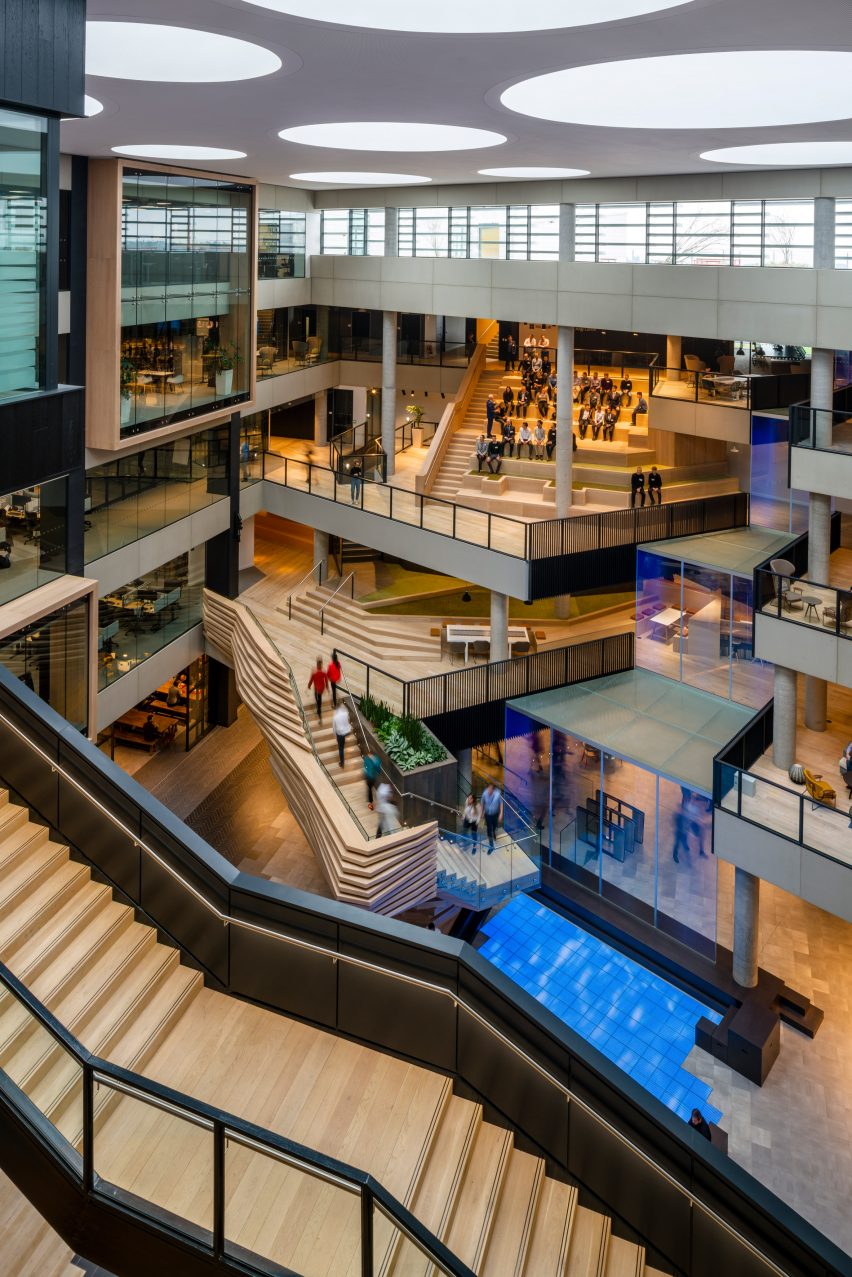 An interactive display runs down several levels like a waterfall cascading down a mountainside, with the vertical light-up panels forming the sides of work stations.

The waterfall feeds into a “lake” of colour-changing tiles, surrounded by graduated grey flooring and black benches arranged in rock-like formations around the edges. Wooden louvres on the staircase and uneven steps between levels create a stylised version of geological formations.

The entrance is conceived of as a “harbour”, for arrivals, and a “beach” area is dedicated to socialising. An open-plan working area is a “grassland”, where teams can arrange themselves in “neighbourhoods” to maximise collaboration. The upper levels are the “mountain”, a place for “learning and discovery”. 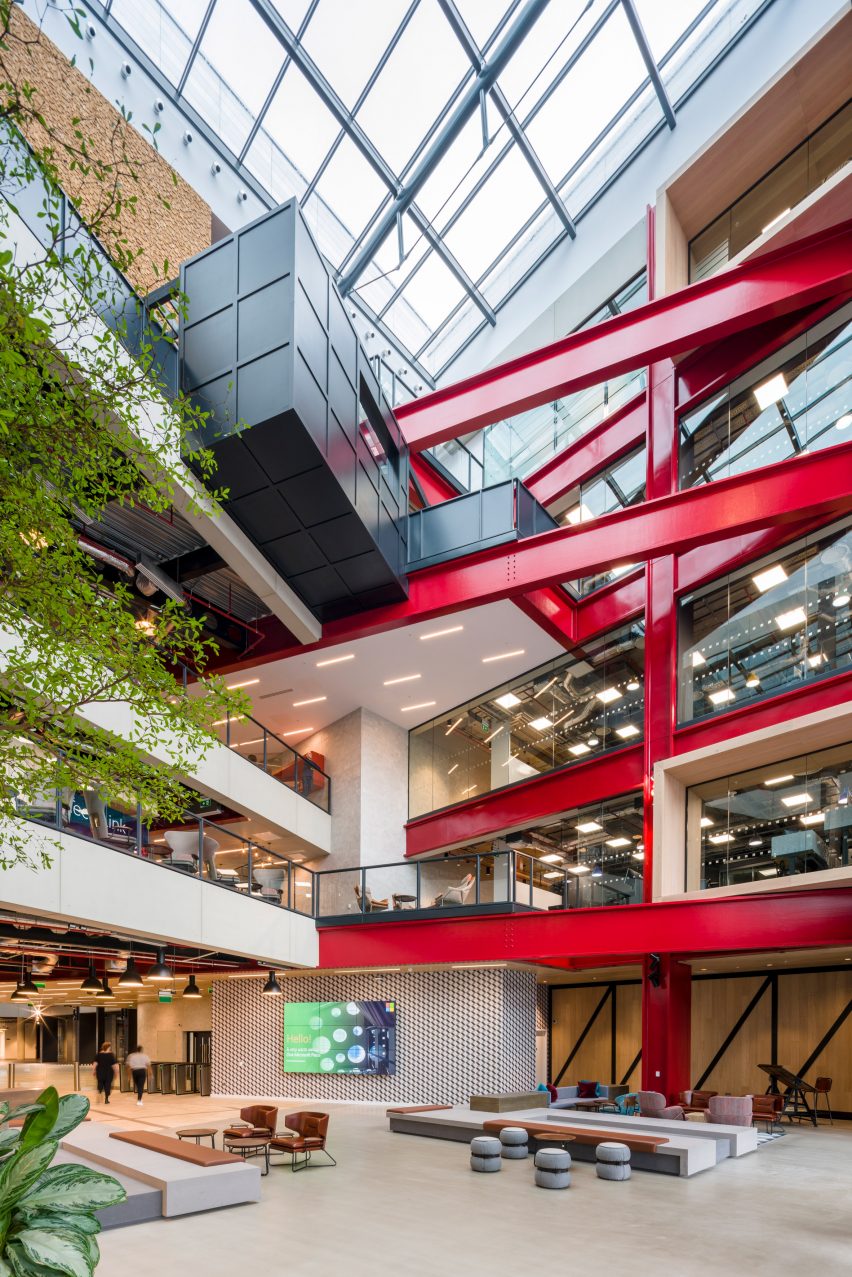 A trail connects the areas together, turning a traditional office corridor into a functioning workspace. This geographic layout, the architects hope, will encourage “chance encounters and purposeful collisions” between Microsoft Ireland’s employees.

Skylights at the top of the central atrium allow light to reach the centre of the office, with windows and galleries arranged around the perimeters of the upper levels providing clear views across to different parts of the office. 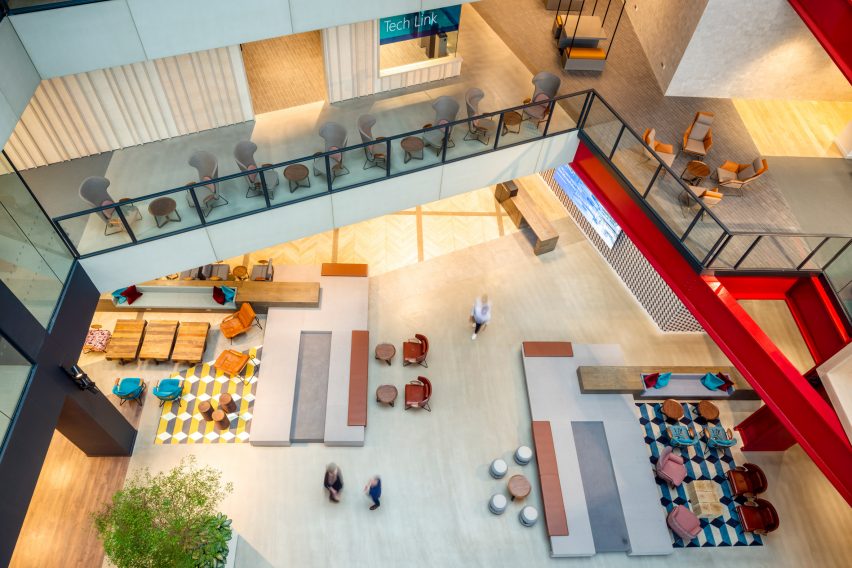 A wide variety of seating and desk arrangements can be found on each floor, from mismatched lounge chairs to high desks and stools.

Bright lights and coloured fixtures contrast with pale floors and walls throughout. Large red columns and beams provide a cheerful update on the industrial warehouse style favoured by many tech companies, and in the cafeteria house-shaped recesses with benches for group meals are lit with blue neon strips. 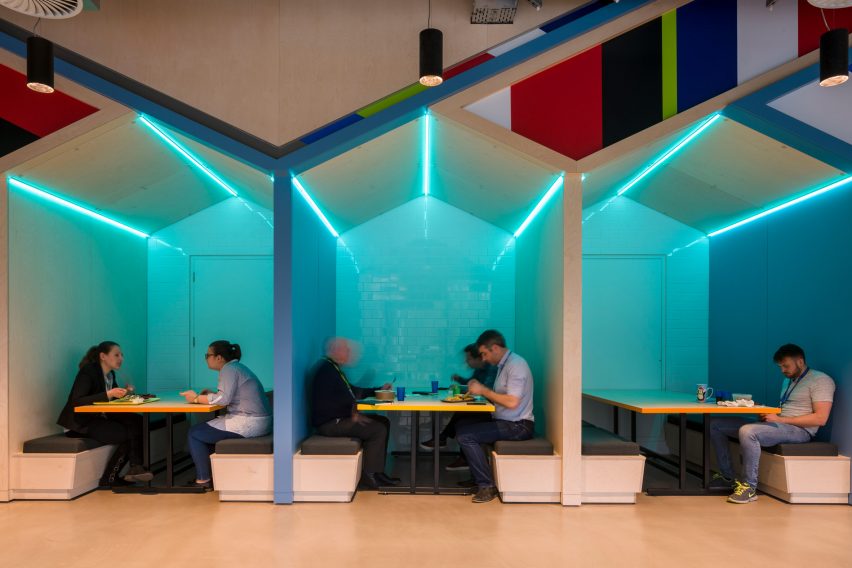 “We really wanted to understand Microsoft’s culture and its people, to design for their varying needs, their diverse interactions and their potential journeys within the island design concept,” added Baldwin.

“Our priority was to connect everyone to everything in a meaningful way, creating an active workplace where movement was both facilitated and enjoyable.”

In San Francisco, Gensler transformed a historic warehouse where military destroyers were once manufactured into an open plan office for tech company Gusto, leaving the large steel hoists in situ. In Kansas the global firm designed a university building with a layout that encourages “chance encounters” with an auditorium that doubles as a tornado shelter.

For Microsoft’s Danish headquarters,  Henning Larsen Architects based the office design on a white paper written by the company’s founder Bill Gates. The Microsoft Domicile in Lyngby also features stacked rows of balconies lining an atirum leading up to gridded skylights.