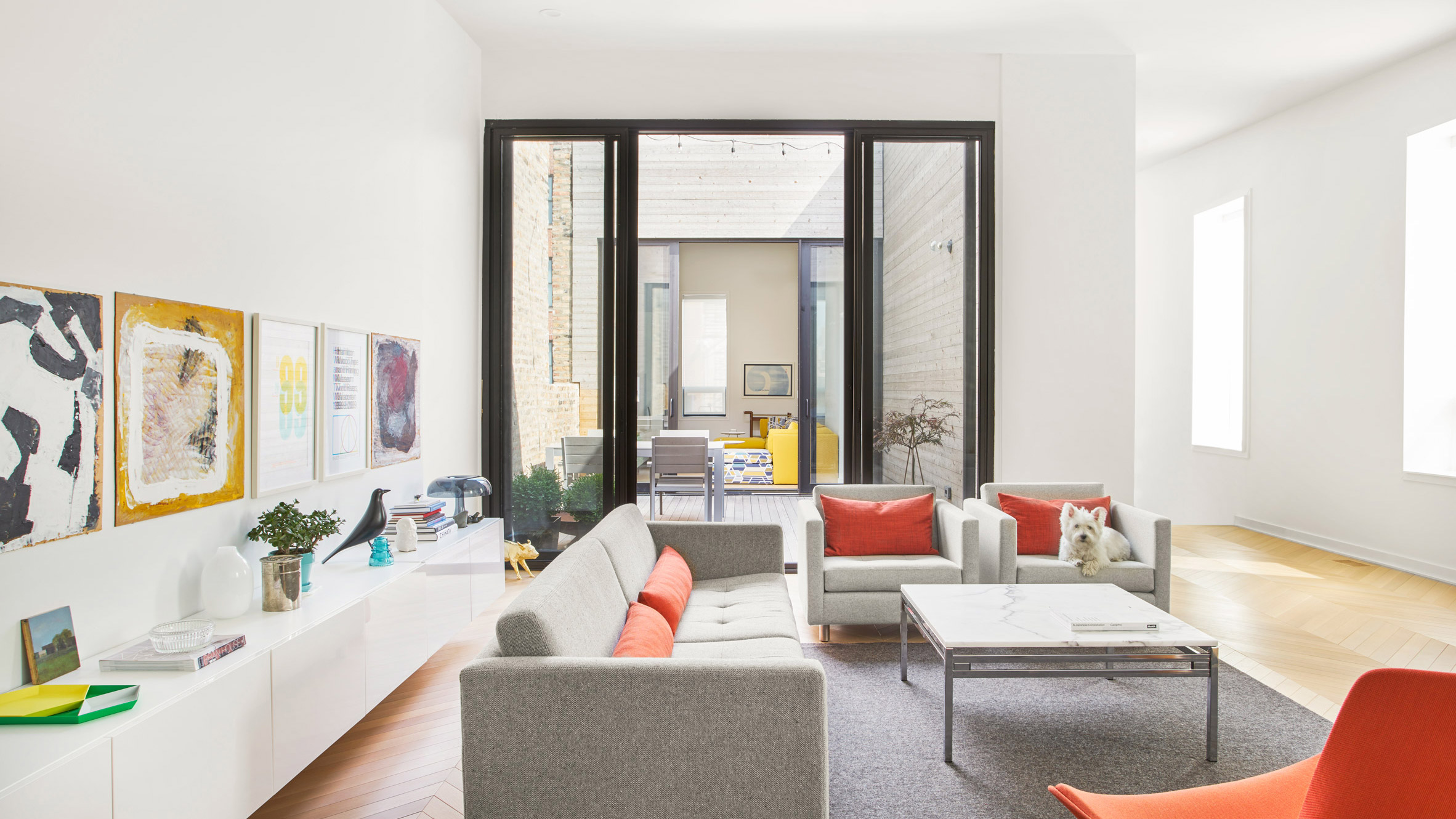 Chicago architect Jeff Klymson has designed a home for himself inside an old industrial building in the city, while reserving the ground floor for the studio of his firm Collective Office.

The office-cum-residence is located in Chicago‘s South Loop neighbourhood, inside a former factory built in 1889. 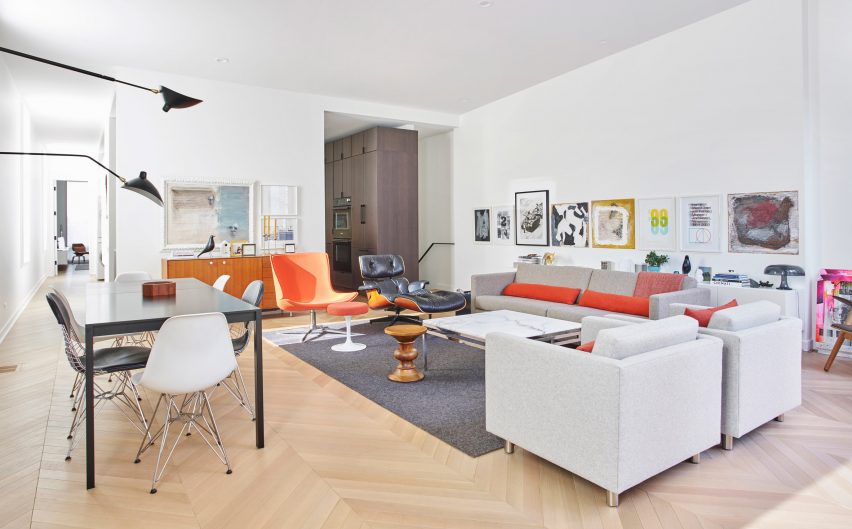 The project involved the adaptive re-use of the small industrial building into a studio for Collective Office on the ground floor, and a three-bedroom apartment for its founder upstairs.

Principal Jeff Klymson undertook the conversion with his partner Sarah, who is also an architect and interior designer. 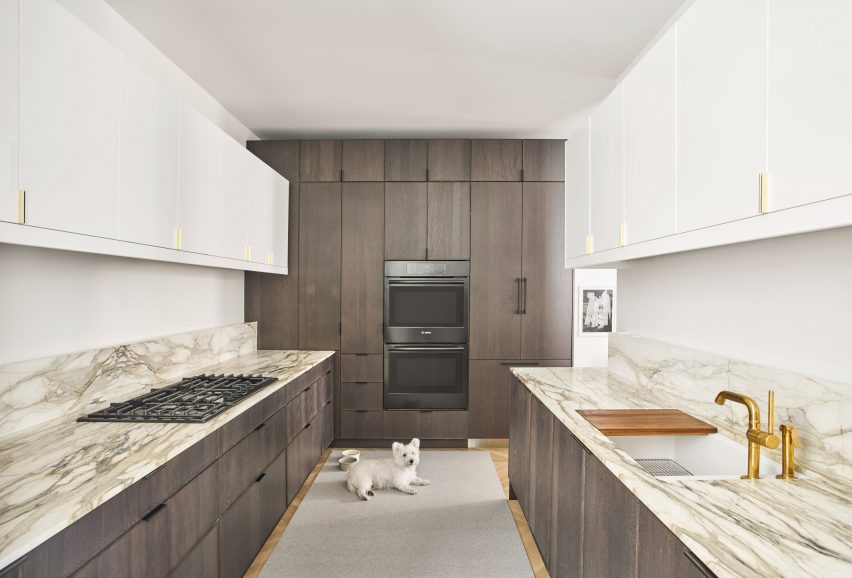 Together they overhauled the deteriorating structure, adding new timber floors upstairs, as well as custom woodwork and white walls to brighten the space.

The two-storey brick building features a narrow floor plan, with the levels connected by two stairwells: one at the front entrance, and the other to the rear of the studio. 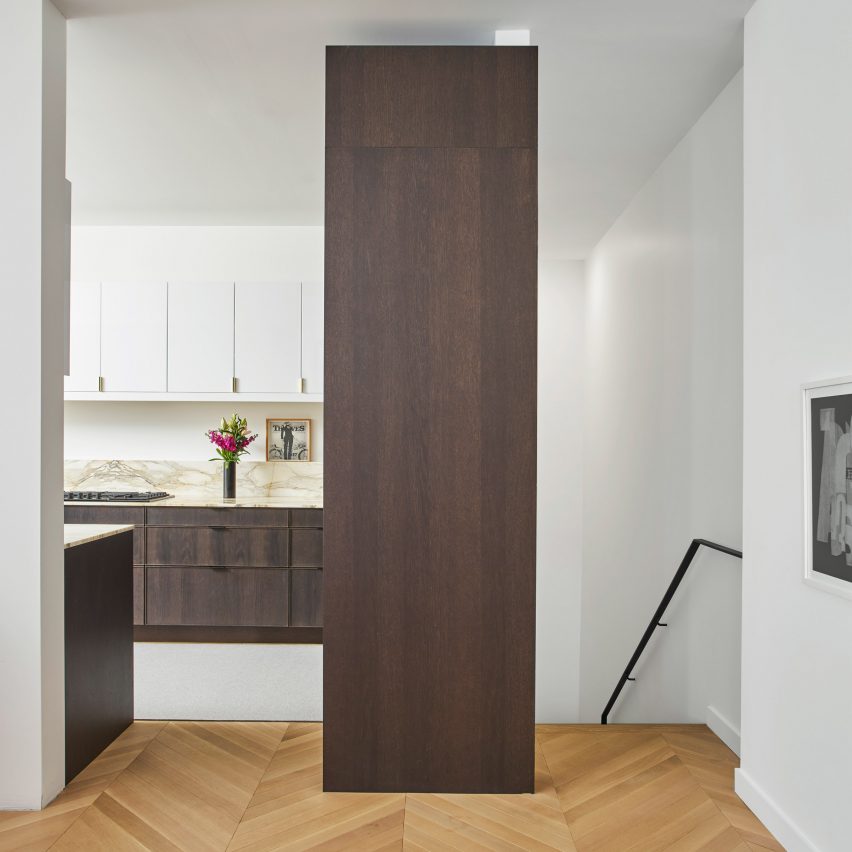 On the upper floor, a focal point of the redesign is a courtyard for the residence, positioned between a living room and a library, and accessed through sliding glass doors.

Bedrooms are located at each end, with a third room near a galley-style kitchen. A combination of dark wood and white cabinets, marble counters and gold fixtures feature in the cooking area. 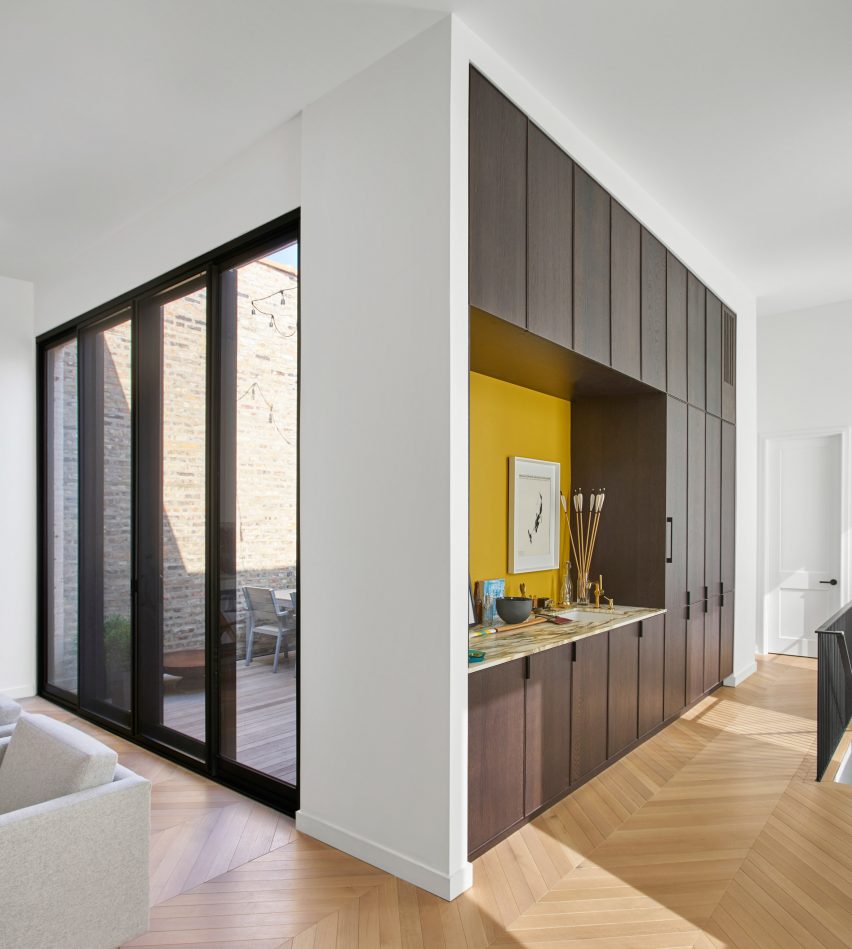 Lightwood chevron-patterned floors, white walls and a grey-toned palette are found throughout the apartment. Hints of red and yellow are used on upholstery, along with other colourful decor. 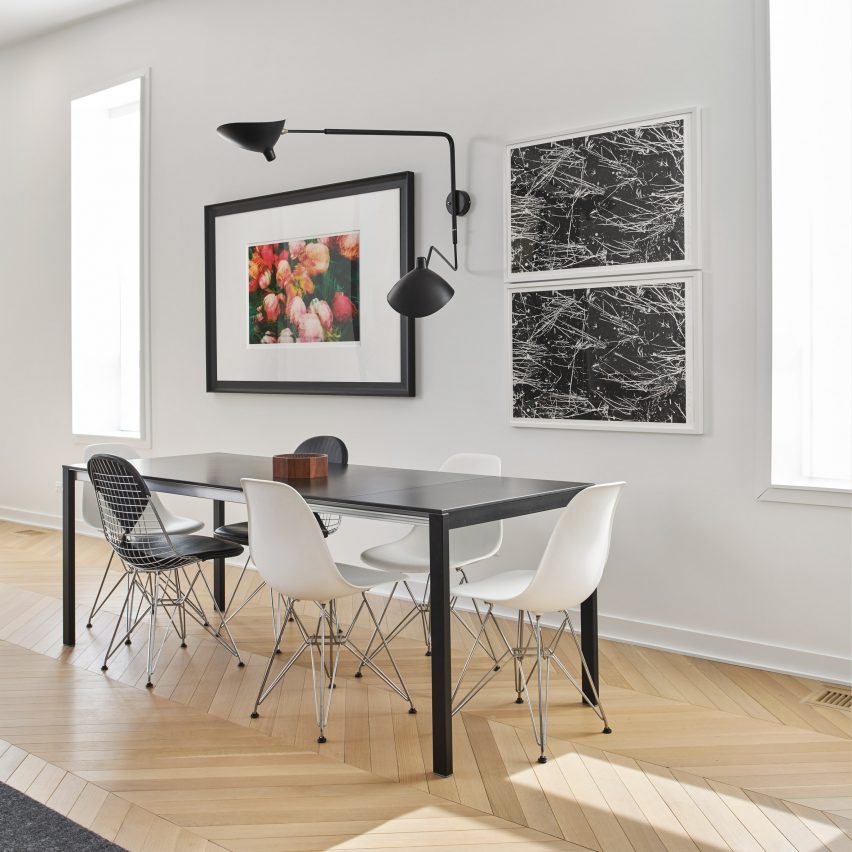 Other pieces include a walnut credenza by American designer George Nelson, a series by Shepard Fairey in the hallway, and work by fine arts students at School of the Art Institute of Chicago (SAIC). 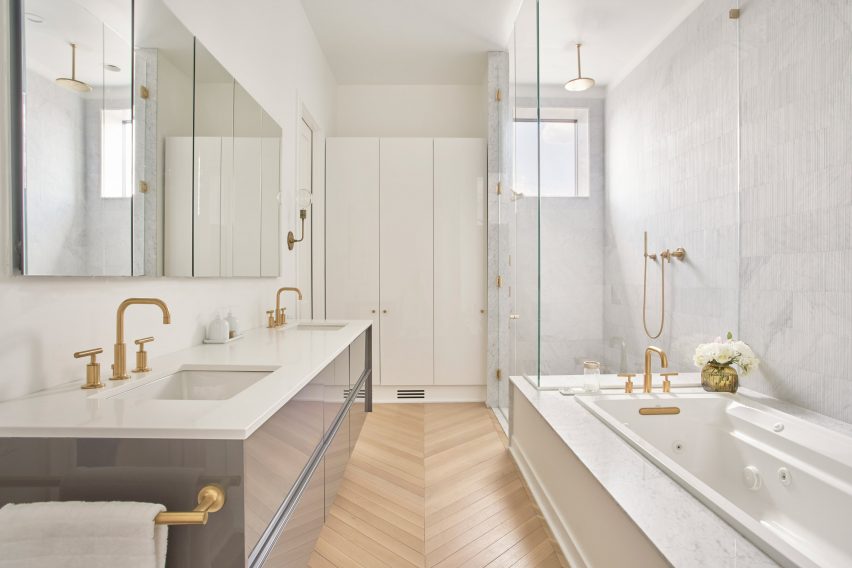 Much of the ground floor is an open-plan workspace, with a small kitchen and two bathrooms located in the middle of the building. At the rear is a one-car garage and a separate meeting space. 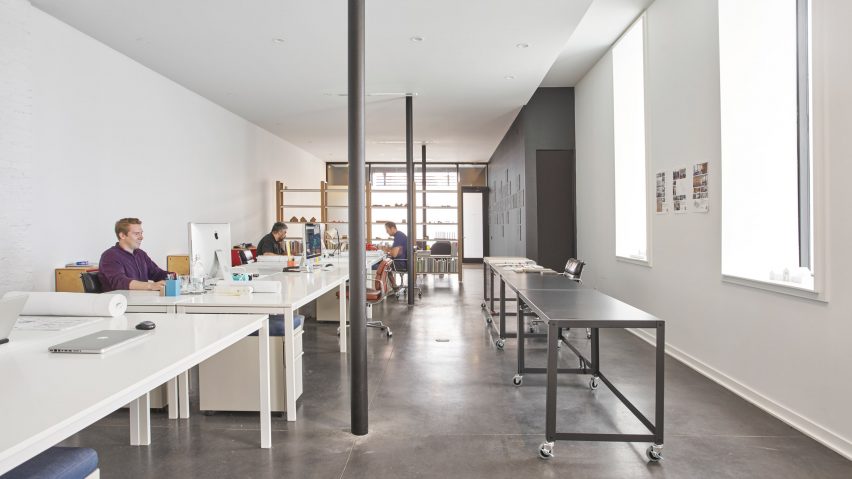 Also in Chicago, architect Matt Nardella turned an abandoned bodega into his home and a studio for his firm Moss, which similarly arranged around a courtyard. 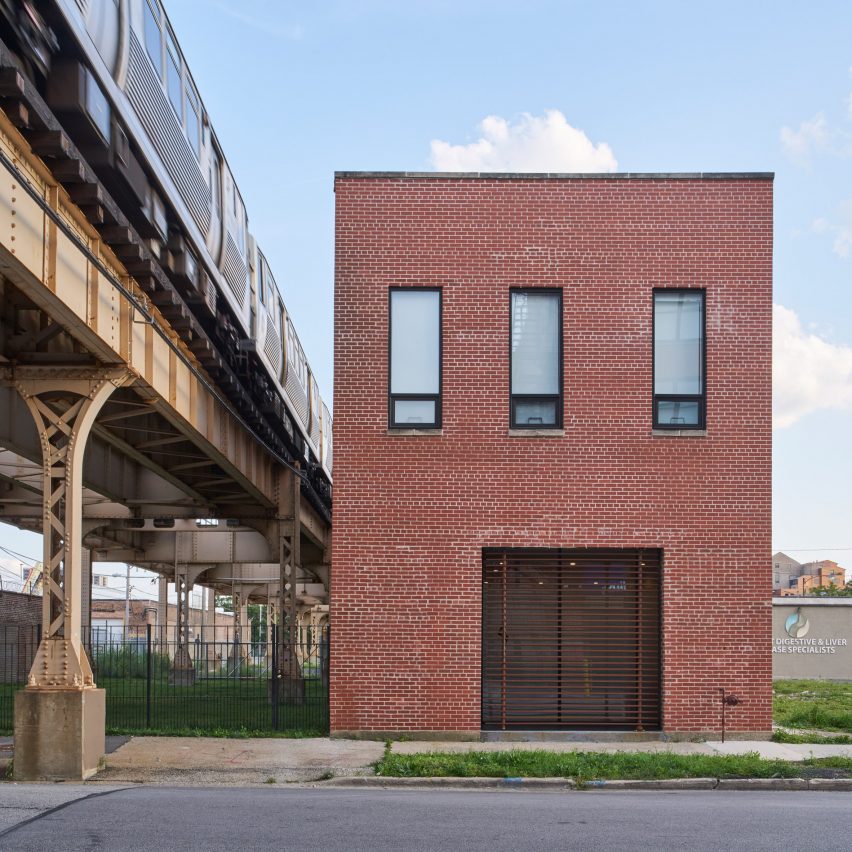 Other conversion projects in the city include a headquarters for hat maker Optimo based in a former firehouse by Skidmore, Owings & Merrill, and the Proxy restaurant housed in an old print factory by Meyer Davis.

Photography is by Mike Schwartz.