Cocktail bar “suspended between sea and sky” draws upon nearby Mediterranean 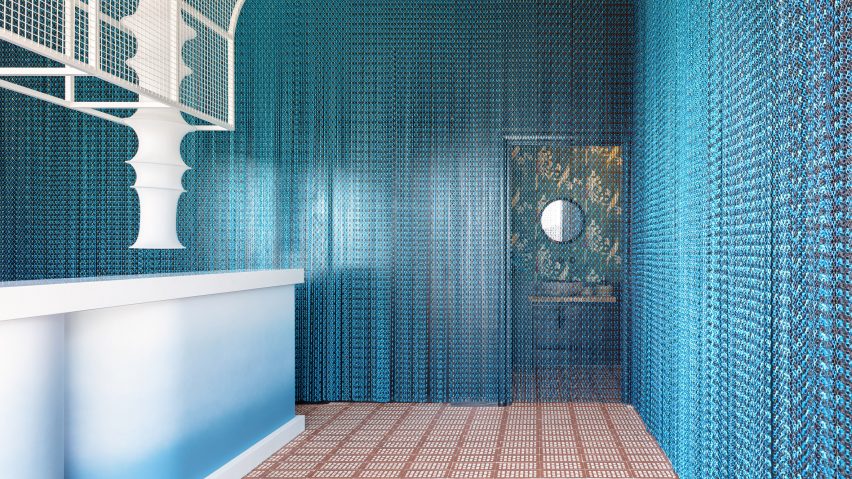 Architect Gae Avitabile has designed the interior of Civico 29, a sea-informed cocktail bar in the coastal town of Sperlonga, Italy.

Located halfway between Rome and Naples on Italy’s western coast, the bar features colours and materials informed by the nearby seafront, with blue motifs and wave-like forms dominating the space.

Avitabile transformed the oceanside building, which previously contained an ice cream parlour, into a bar that aims to recreate the sensory experience of being on a beach.

“The space was used as a gelato ice cream parlour with simple, traditional interiors which were not evocative of the location,” Avitabile told Dezeen.

“Not being able to work on spaces and volumes – both in physical terms due to the small size, and because of the limits imposed by the council – I changed my point of view and began to think in terms of a project which would find its own dimension in multi-sensoriality,” he continued.

“For me, the sea is light and colour, sound, touch, taste and smell.”

The project was heavily influenced by the local area and uses a minimal material palette.

“The materials are unusual for the setting, and have been chosen to give life to my multi-sensory project,” Avitabile commented. “Despite this, the perception is that of strong links with the location.”

Visitors enter through a wide opening that leads to the main space. The room contains a long bar with a wave-like form coated in a blue gradient that mirrors the view of the ocean outside.

“The bar, its sinuous shape reminiscent of the movement of the waves, is an implicit reference to the sea and draws inspiration from the area’s great pieces of architecture,” said Avitabile.

A lamp by Munari inspired by fish traps is suspended over the counter, contained in a white metal mesh structure, while a layer of traditional European hollow bricks filled with white lime and covered with resin lines the floor.

Surrounding the space is an aluminium mesh curtain created by Kriskadecor that lines two of the four walls, chosen by Avitabile due to its movement being reflective of coastal breezes.

“[The curtain] moves with gusts of wind and creates an elegant sound reminiscent of a coastal breeze,” Avitabile commented.

To the side of the main space is a small bathroom with wallpaper coated in exotic motifs. Large openings on the opposite side of the bar lead to an outdoor seating area overlooking the ocean.

“I deliberately avoided indoor seating, partly due to the small area available, and partly because enjoying the panorama remains the linchpin of this project,” said Avitabile.

Other cocktail bars featured on Dezeen include a Shanghai bar covered in over 1,000 insects by Atelier XY and a gender-neutral cocktail bar and salon in Kyiv designed by Balbek Bureau

The photography is by Carlo Oriente.